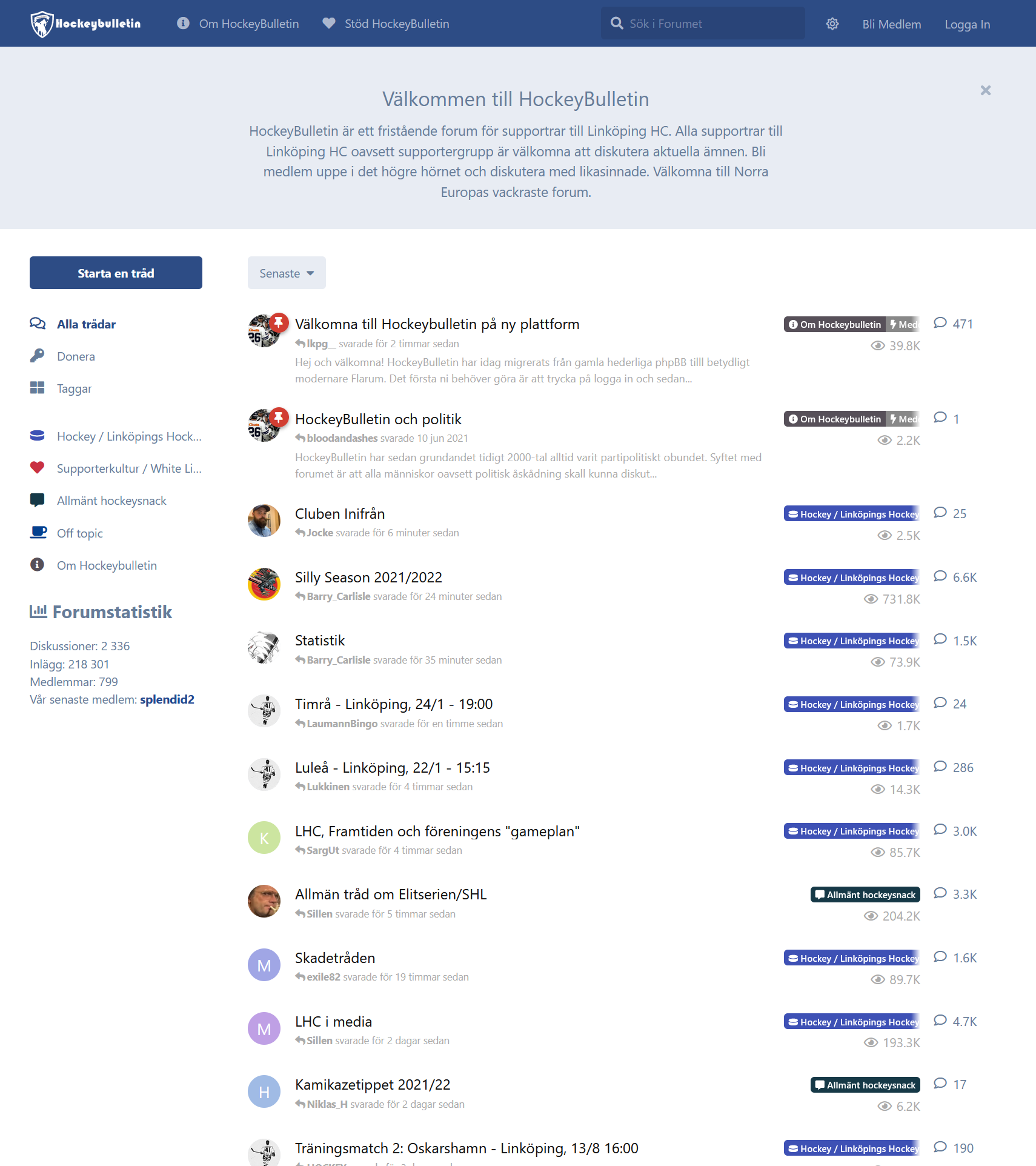 If you have a growing community and find yourself with limited time to do server tweaks Blomstra is a fantastic use case for you. Having a team with great knowledge of the platform monitor your forums and constantly improving it is incredible.

My hometown's local hockey club (Linköping HC, plays in SHL (Swedish Hockey League) have had an Internet forum since the end of the 90s in various forms. Since around 2000, that forum was made in PhpBB. I have always been a member of that community and about 5 years ago the admin at the time was wondering if someone else would be willing to help out and take over the maintenance of the forums.

I became involved in the project and for the first years I only made sure that the forums were working properly and updating it to the newest phpbb versions. In 2020, I felt that Flarum was mature enough and decided to migrate the forums over from phpbb (quite a tedious process making sure all users and posts were properly migrated over).

After the migration to Flarum, the forums became more active and as I was getting more busy with work and family I felt the need to look for someone else to run the forums, someone with experience with Flarum and hosting. As our forums are revolving around a sports team, there was a need to have a server infrastructure that would be able to scale during peak hours (e.g. during a game). I initially tried to throw more money at the server I hosted the forums on but without competence on how to properly optimize the instance it did not really matter. The forums went from about 20 concurrent users during the day to peaking at 300 concurrent users making the forums crash and lag out.

At this time, I found that Blomstra was starting and immediately announced my interest. I have seen the names involved in the project involved in the core development of Flarum and working with someone whom I know 1) Knows the plattform very well and 2) very actively still contributing to the development of it sounded like a perfect fit. The Blomstra team also offers scalable solutions which is something that is a perfect match for me with my inconsistent user surges.

What position do you hold in regards to your community?
Administrator. Forum is non-profit (users donate for the upkeep) and no ads are shown.
Can you explain what your community is about and why people like being involved with it?
It´s a hockey forums for "our" team. People are very involved when it comes to sports and every single detail, or game, needs to be discussed. I also believe the pandemic has increased the need to discuss online as bars are closed.
At what scale is your community operating? Number of posts or monthly visitors for instance.
As for now, we have about 1500-2000 posts per month with a monthly user average of 30k/300k pageviews.
What problem did you want to solve by moving to Blomstra managed Flarum?
I wanted to have a reliable hosting partner that was able to meet my needs for scalability during peak hours.
How was that problem solved?
Blomstra solved this issue by offering scalable servers and making sure that any errors were resolved quickly.
Did you expect or get any additional benefits after migrating?
Blomstra has a range of fantastic in-house built extensions such as the payments extension. This made it possible for me to integrate donations from members directly on the forums. The real-time plugin also works very well.
How did you perceive the level of interaction from the Blomstra team?
The support and interaction from the team have been fantastic, always reachable and quickly resolving issues, even though the time is past business-hours.
Talking to a friend with a community, how would you explain that a move to Blomstra makes sense?
If you have a growing community and find yourself with limited time to do server tweaks Blomstra is a fantastic use case for you. Having a team with great knowledge of the platform monitor your forums and constantly improving it is incredible.